Maggi products are tailored to regional tastes and include savoury ingredients, such as herbs and spices, to encourage Africans to use them when cooking at home and to season traditional dishes.

They include hard bouillons, powder bouillons and liquids, which come in a variety of flavours such as Maggi Chicken, Maggi Shrimp, Maggi Nokoss, Maggi Safsafal, Maggi Tomatoes-Spices, and Maggi Mix’Py Ginger and Garlic.

Soya beans are another popular ingredient in African kitchens as they are affordable and a good source of protein in comparison to meat, poultry and eggs. The bean curd is usually fried and eaten as a snack or at breakfast.

In the 1990s, Nestlé carried out trials to include soya beans as an ingredient in some of its products and found that fermented soya beans were similar to a West African traditional ingredient known as ‘oumbara’ in Côte d’Ivoire, Mali and Burkina Faso, ‘netetou’ in Senegal or ‘dawadawa’ in Nigeria and Ghana.

Dawadawa gives a fermented, meaty and mushroom-like taste to dishes and is a popular local seasoning across Nigeria.

As well as meeting local tastes and traditions, Nestlé is promoting the use of such local ingredients, which supports the local economy.

Today the company locally sources soya beans from farmers in Nigeria, the largest producing country of the crop in sub-Saharan Africa.

Nestlé processes, ferments and roasts the soya beans before the powdered natural soya is used as an ingredient in Maggi cubes to provide Nigerian consumers with the well-liked fermented and meaty flavours.

Sourced from about 4,000 local farmers based in 65 villages, mostly women, the cassava is processed into flakes at Nestlé’s Yopougon factory.

In addition to providing popular tastes through the use of tailored products, Nestlé is also helping to address health issues in Central and West Africa by fortifying most of its Maggi range with iron.

The World Health Organization (WHO) considers the fortification of staple foods, condiments, spices and seasonings as appropriate vehicles to increase the intake of vitamins and minerals if they are consumed consistently by most of the population.

The company, together with local governments, academia and non-governmental organisations, is addressing the most prominent micronutrient deficiencies in the region as part of its pledge to reach 200 billion micronutrient fortified servings of foods and beverages annually worldwide, with a special focus on children and women of childbearing age.

Young children and pregnant women are particularly vulnerable to iron deficiency because they need higher levels of the mineral for growth.

Iron is part of the red blood cells, specifically the protein haemoglobin, which carry oxygen through the blood. Anaemia – the state of having too little haemoglobin in the blood – is mostly caused by a lack of iron in the diet. Long-term iron deficiency in diets can cause impaired mental development in children and reduced immune function.

In some countries in Central and West Africa up to 90%of children are anaemic.

Nestlé’s iron-fortified Maggi cubes and tablets were first launched in Nigeria in 2012 before being rolled out across the region.

The launch was supported with communication activities and simple educational materials to raise awareness locally about the health implications of micronutrient deficiencies.

To reach the widest possible number of consumers, the product is affordable, a 4g Maggi cube, for example, costs about five cents. It is a popular product with more than 52 billion individual servings of iodine and/or iron fortified Maggi bouillons consumed in the region 2014.

Maggi bouillons enhance taste with a precise and limited amount of salt –without the need to add anymore salt during or after cooking.

The brand recommends the use of two tablets or fivecubes in a dish for six people. This is the equivalent to 1.8g of salt per person, or 30% of the recommended daily intake. 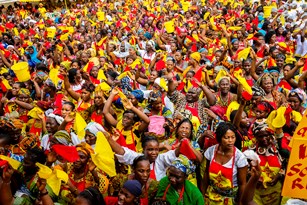 In other countries, such as Senegal, cooking shows on television provide consumers with healthy tips and information on howto use the product.