Nescafé has been awarded Twitter Creative Award for the month of September after a successful online campaign sharing the inspiring stories of young people. 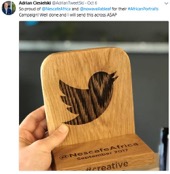 Over the past 3 years, Nescafé Africa has been collecting and sharing the Get Started stories of young Africans across West and Central Africa on our social media platforms. This falls under the brand's Get Started initiative, which seeks to inspire young people to chase and live their dreams.

Fans from across the region have always loved content on Get Started we posted and would occasionally message us their own stories. Nescafé decided to allow them to freely share their stories on our Twitter platform along with their colleagues.

This was a “one-of-a-kind” approach we used because stories were not only being shared, but the fans’ pictures were also captured into a photo mosaic which depicted a mug of Nescafé powering young Africans from various fields of endeavor .

influencers (popular online personalities in the areas of blogging, cinema and comedy), who amplified content on their platforms using the hashtag #MyAfricanPortrait.

The campaign was successful, causing a huge spike in our reach and engagement on our Twitter page with 6, 394, 444 impressions.

We received over 5000 story entries and over a million video views during the campaign period.