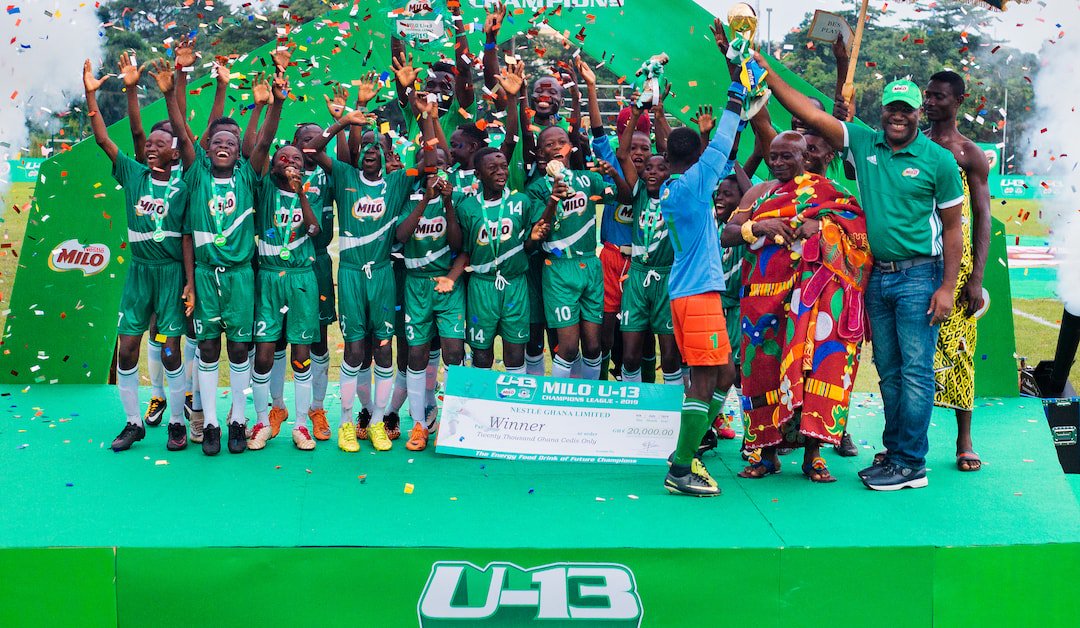 After 8 weeks of competitive tournament engaging 64 school teams across the 16 regions of Ghana, Amoawi Methodist Primary School have beaten off competition to emerge champions of the 2019 edition of the MILO Under 13 Champions League. For their reward, the school received a cash prize of GHS20, 000, the most anticipated trophy of the 2019 tournament, a Samsung tablet and 3 Milo smart balls which are capable of connecting to smart devices to give players real-time feedback on power, distance, spin, trajectory, number of touches and playtime. St. Joseph International School in Ahafo and Bodaa R/C Primary in Bono who took second and third places received cash prizes of GHS12, 000 and GHS 7, 000 cedis respectively with medals, Samsung tablets, and Milo smart balls.

Amoawi Methodist Primary is a school within the suburb of Offinso municipality in the Ashanti Region. According to the Coach of the school, Mr. Albert Kwadje, the team have shown incredible talent throughout the tournament and it is rewarding to see them emerge champions at the end. He congratulated his team and thanked Nestlé MILO for bringing the competition to their school.

In a speech read on behalf of Philomena Tan, Managing Director of Nestlé Ghana by Ousmane Kamara, Financial Controller of the company, “she reiterated that the brand Milo, has over the years, highlighted the importance of education and sports development because we believe through sports and education, children learn lifelong values that will enhance their future choices and prospects on their journey to achieve their dreams and goals in life”. She added that aside unearthing sporting talent in children, the Milo U-13 Champions’ League also promotes and demonstrates the importance of eating healthy and living active lifestyle. “Nestlé, in the spirit of Creating Shared Value will continue to engage and invest in young people through its brands including MILO as part of our global ambition to help 50 million children lead healthier lifestyle by 2030”. She thanked all partners including the Ghana Education Service.

Nana Kweku Amankwah Sarkodie II, Chief of Sewea in the Bosomtwe District of the Ashanti Region, representing Otumfuo Osei Tutu II at the grand finale, thanked Nestlé for their contribution in developing the youth who will eventually find themselves in the National teams. He encouraged other companies to emulate Nestlé to contribute to sports development in Ghana.

On his side Emmanuel Dormenyah, Director of Physical Education and National Sports Coordinator of the Ghana Education Service, partner of the MILO U13 Champions league said, “it has been gratifying to partner with Nestlé to discover talents on a platform such as this. We believe that combining sports with academics will bring the best out of the school children as they learn life values on the field of play such as teamwork, dedication, and respect that help contribute to academic excellence”.

Tournament icon, Stephen Appiah who led and trained the teams ahead of each competition during the 2019 season encouraged the children to continue building the talents they have while taking their education seriously.

Through collaboration with Ghana Education Service, Nestlé MILO over the last 2 decades under its sports development program in schools has discovered talents such as Michael Essien, John Mensah, and Mubarak Wakaso.