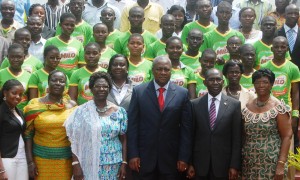 VICE PRESIDENT - (Third from right): with award receipients and officials of the Ministry of Education.
Ghana’s First Lady, Ernestina Naadu Mills, on Monday led a national celebration for 20 high achieving students, with MILO as the lead sponsor. The event was held to herald Ghana’s 55th independence anniversary.

Instituted in 1989, the President’s Independence Day Award is given to deserving Basic Education Certification graduands who have also exhibited special qualities of excellence, including school sports, community services and good conduct.

This year’s ceremony was witnessed by a large crowd including the Minister of Education, Lee Ocran, Ministers of State, the diplomatic corps, traditional rulers, educationists and the Country Manager for Nestlé Ghana, Moataz El Hout,.

At the State Banquet Hall in Accra on March 5, 2012, Mrs. Mills handed over the Nestlé sponsored prizes to ten girls and ten boys who prevailed in a nationwide contest emerging as the topmost two in each of the ten administrative regions of Ghana.

Nestlé’s expansive award for the 2012 beneficiaries include a laptop computer each, specially commissioned crystal plaques and medallions, 500 Ghana cedis (about 300 USD) cash prize, a certificate signed by the President of Ghana, J.E.A. Mills, and assorted Nestlé products for one year, aside a hamper.

The awardees also enjoyed a full range of other Nestlé perks including a luncheon meeting with the Vice-President of Ghana, John Dramani Mahama, at the seat of government, the Castle, Osu, and embarked on educational tour of places of national interest. Nestlé Ghana is also organizing a special feast for the awardees as well as other students in Accra, codenamed the MILO Independence Day Bash.

Country Manager for Nestlé Ghana, El Hout Moataz, aligns the core values of the brand with those of education, saying “success in everyday life is what MILO stands for and this is in line with the values of education and sports”. 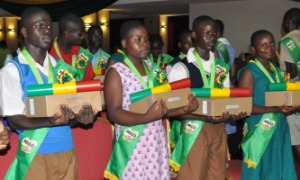 AWARDEES: A cross-section of students who received the President's Independence Day Awards.

He said Nestlé’s sponsorship of education and sports events including the Accra MILO Marathon, the MILO African Championship, the MILO Junior Ball, the MILO Schools Sports Festival and the Ghana Education Service Inter-school and Colleges Sports festival was premised on the fact that “education is the most powerful tool for ensuring that children understand the values of society”.

The 25-year old Accra MILO Marathon, for instance, has become the biggest single branded sporting event attracting thousands of people in what can be described as a national sports-fest, helping in nurturing stalwarts in competitive athletics in Ghana.

Samuel Osafo, Category Business Manager for Beverages said MILO uses education and sports as pillars to give young children the “the wings that would enable them to fly”.

Jude Ekow Addison, Brand manager, Cocoa Beverages, Nestlé Ghana concurs saying that MILO has nourished champions who are have become successful not just for themselves but also for the nation.